Hector De Leon grew up in humble circumstances on the east side of Austin, Texas. For most of his life he was surrounded by the Democratic Party, but switched allegiances after Republicans endorsed him in a local election. He hasn’t regretted his decision.

“I was welcomed with open arms by the GOP,” he said.

Today, the 67 year-old is co-chair of the board of directors of the Associated Republicans of Texas (ART), whose mission is to strengthen the state’s Republican party in part by building a long-term commitment to Hispanics… 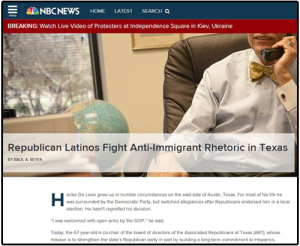