Miscommunication is common, and unfortunately, when it comes to contracts, once a deal is finalized, it can be extremely difficult to prove that the contract you entered means what you thought it meant when you agreed to it. Even when a contract is in writing and is reviewed by all parties before it is finalized, that is no guarantee that once a dispute arises, any of the parties will agree on the meaning of a given clause. Contractual ambiguity is a frequent source of legal battles, and it’s important to identify during contract formation any wording that may give rise to such disputes down the road. 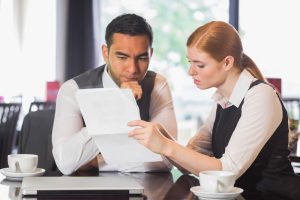 What makes a contract ambiguous?
“An ambiguity in a contract may said to be “patent” or “latent.” Nat’l Union Fire Ins. Co. of Pittsburgh, PA. v. CBI Indus., Inc., 907 S.W.2d 517, 520 (Tex. 1995). Patent ambiguity is evident on the face of the contract,” while “latent ambiguity arises when a contract which is unambiguous on its fact is applied to the subject matter with which it deals and an ambiguity appears by reason of some collateral matter.” Id. Overall, contractual ambiguity exists “only after the application of established rules of construction leaves an agreement susceptible to more than one meaning,” and “both potential meanings must be reasonable.” Id. “A simple lack of clarity or disagreement between parties does not render a term ambiguous.” Tellepsen Builders, L.P. v. Kendall/Heaton Associates, Inc., 325 S.W.3d 692, 696 (Tex. App.—Houston [1st Dist.] 2010, no pet.).

Who determines if a contract is ambiguous?
A judge would determine whether a contract’s terms are ambiguous, as this question is a matter of law that cannot be decided by a jury. A contract “is ambiguous when its meaning is uncertain and doubtful or it is reasonably susceptible to more than one meaning.” Coker v. Coker, 650 S.W.2d 391, 393 (Tex. 1983). The judge would decide this “by looking at the contract as a whole in light of the circumstances present when the contract was entered.” Tellepsen, 325 S.W. 3d at 696. “. . . [T]he primary concern of the court is to ascertain the true intentions of the parties as expressed in the instrument,” and courts will “consider the entire writing in an effort to harmonized and give effect to all the provisions of the contract so that none will be rendered meaningless.” Coker, 650 S.W.2d at 393.

In Zurich American Ins. Co. v. Hunt Petroleum (AEC) Inc., an appellate court found that a contract was ambiguous and required the presentation of evidence to a fact-finder (such as a jury) who could determine how the ambiguous terms should be construed. 157 S.W.3d 462, 466–67 (Tex. App.—Houston [14th Dist.] 2004, no pet.). The contract was ambiguous because one paragraph, “by its plain terms, applie[d] to a situation of damage caused by a flood,” and the parties to the contract interpreted the paragraph differently. Id. One party argued that “force majeur clauses historically function to excuse performance,” and that the paragraph referred to such situations. Id. at 467. But the opposing party interpreted the word “damage” in the paragraph in a manner the court considered to be reasonable, thus resulting in two different possible meanings of the disputed paragraph. Id.

The judge determined the contract is ambiguous. Now what?
Once it is determined by a judge that, as a matter of law, certain language in a contract could reasonably have more than one meaning, the parties to the suit must present evidence supporting their interpretation of the contract. A fact-finder (either the judge, or a jury if one is selected) would examine the evidence to discern “the true intent of the parties.” Coker, 650 S.W.2d at 394.

For example, in one trial involving the termination of a university professor, the professor argued that the university had “breached [his] employment contract by failing to comply with procedures” dealing with: the termination of tenured professors, the methods by which allegations of sexual harassment are to be followed, and procedures on employee confidentiality. Therefore, most of the evidence presented at the trial dealt with termination procedures, and the parties argued about which procedures applied under the contract and whether those were followed.” Fox v. Parker, 98 S.W.3d 713, 718, 720 (Tex. App.—Waco 2003, pet. denied).

Seek legal help to minimize contractual disputes.
It’s common for several people reading the same document to interpret it several different ways, and when parties enter contracts, it’s natural that each party will be pursuing its own interests. This means that a party may interpret the contract’s terms in a way that’s overly favorable to himself when the contract doesn’t justify such an interpretation. This also means that one party may take advantage of another party’s misinterpretation of the contract and that the disadvantaged party will suffer a rude awakening once the contract’s performance is underway. It’s important to seek the advice of legal counsel before entering a major contract so that you fully understand what the contract actually means, what your legal obligations will be, and how the contract will be interpreted and enforced by courts.

Athena Ponce and the attorneys at De Leon & Washburn, P.C. are available to assist clients with contractual and civil litigation issues. For more information regarding the firm’s practice areas, please visit our Practice Areas page, and please feel free to contact the attorneys at any time.