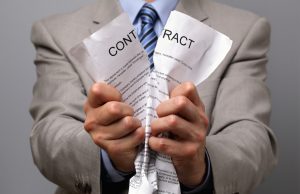 When clients come into our office with a breach of contract case, a large part of the conversation revolves around getting an idea of which damages and categories of damages are and are not recoverable in that specific case. This article is the first in a series dealing with the different types of damages a party can recover in a breach of contract case. As it’s the first, I think it makes sense to start with the most common type of damages: Actual Damages.

This is the most common type of damages model and in most cases is arrived at by combining the plaintiff’s (in this instance PlaintiffCo’s) expectation interest and reliance interest in the contract. PlaintiffCo is always required, under this model, to take reasonable steps to mitigate or minimize the damage it will suffer once it learns of the breach of contract.

Jacob D. Abrahams and the attorneys at De Leon & Washburn, P.C. are available to assist clients with commercial litigation.  For more information regarding the firm’s practice areas, please visit our Commercial Litigation page, and please feel free to contact the attorneys at any time.